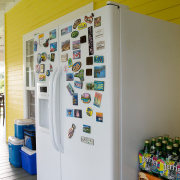 Go to Rusty Jr. for your treats at Kalaekilohana Inn & Retreat

Like my father before me, I’m your beverage host and storage partner. If you wanna chill, I’m your guy. So make sure to say hi after you get settled. I’ll be holding court just around corner, with a cold beverage for the taking. Yeah, that’s right. Help yourself. Mi nevera, su nevera. 🙂

I like it alot. I like it so much, I got my boss to knock ten bucks off your tab if you bring me one. Great savings! 😐

Okay, I don’t have that much influence and that was the best I could do, but think of the long term value. We’ll become friends. You’ll have a friend in Hawaii. I’ll show your magnet off to everyone. Say nice things about you. You’ll be stuck on me. Uhmm, that’s better than it sounds.

Get in the Game

So over the next several months, I’ll be doing what I always do. Chillin’ and sharin’ some stories. I’ll also be running a little game where folks that have stayed with us before can claim their magnet and win a little prize.

They just need to toss a photo onto the blog and, shazam!, they win. More about that later. I still have to work out the details with the boss.